Where We've Come From 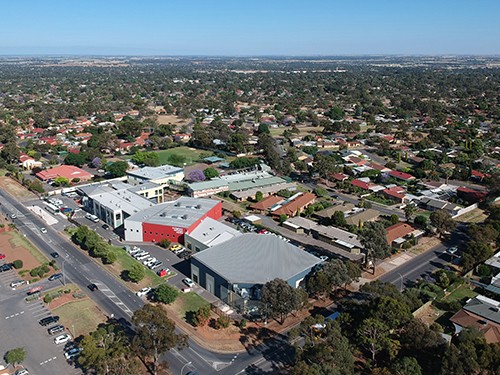 Craigmore Christian Church is affiliated with the Christian Community Churches of Australia.

Our story began in 1962, when the new City of Elizabeth just north of Adelaide was being built. One of the many hundreds of construction workers involved in building the city was a man named Bill Springham. He had a passion to share the gospel of Jesus with the people who were moving into this fledgling community. He with his friends Murray & Heather Jackson began a Sunday School in Elizabeth Park Primary School in the new satellite city.

The Elizabeth Christian Church began to meet a little while later in the home of Ron & Lib Sweetman. The church fellowship grew and eventually moved to its new building on the corner of Hart Street and Yorktown Road in 1967, where it continued until May 1981.

Over the years God has continued to bless and grow both the church and the school ministry and we have continued expanding on the same property at Craigmore.

In 2010 Craigmore Christian Church moved into its new church facilities comprising of a 1000 seat auditorium, a café area, the church offices and other facilities. The school shares the site, and with the church jointly operates a new gymnasium, as part of wonderful new classrooms, administration and library. All of this was provided wonderfully by the generosity of God’s people.

In 2011 further buildings were added to the impressive complex, courtesy of the the Federal Governments Building Education Revolution which extended the existing complex with both primary classrooms and secondary science laboratories.

In the mid 1800’s, a movement under the leadership of men like George Mueller began in Ireland & England in reaction to church restrictions on Communion. Believing that the only basis for sharing in Communion was saving faith in Christ, without the mediation of any human Priesthood, they met in homes to celebrate Communion in a very simple way. Their spontaneous worship focussed around the Lord’s Table is regarded by many church historians as the purest expression of primitive Christianity since the early church. Their leadership in autonomous local assemblies was relatively unstructured relying on a plurality of lay Eldership rather than paid clergy or a denominational hierarchy. They were marked by their strong commitment to the authority of the Bible, to sound doctrine and thorough biblical teaching, and to a profound dependence on the Holy Spirit’s enabling and empowering.

At Craigmore Christian Church, we still hold to many of our distinctives to this day and our membership of Christian Community Churches of Australia reflects this history and heritage.

Craigmore Christian Church is a part of the network of the Christian Community Churches of Australia.

We affirm the Statement of Faith and the Doctrines of the Christian Community Churches of Australia.

Statement of Faith of CCCAust

We believe the Bible as originally given by God is divinely inspired, infallible, and entirely trustworthy, and is the supreme authority in all matters of faith and conduct, from which we can know that:

These statements we are called to believe, uphold, and proclaim to all persons in all spheres of life.

We’re glad you found us!

We are a church that believes in the message of the gospel as found in the Bible, a message of hope, truth and love.

Like almost every church we say we are all about the Gospel of Jesus Christ. What is the gospel? Does it really have the power to change our lives? How does that happen? If you only do one thing while you’re visiting this website, please follow the links under the tab “Meet Jesus”.

We have come to know the reality of Jesus Christ’s words, “You shall know the truth, and the truth shall set you free!” It is because we have proven this promise in our lives that we worship together. Our goal is to know the truth that God has revealed in His Word.

You’re most welcome to visit and join in with us as we worship God together on Sunday mornings. You’re also welcome to join in any of the other activities hosted by the church. If you do, we pray that you will find the truth of God’s Word to be encouraging, uplifting and life-changing.

Please have a look around the website for more information on the many activities that might interest you. Whether you’re an older person or a young mum, whether you’ve been a Christian for years or just interested in finding out more about God, we trust that you will find something that meets your need.

We would love to meet you in person, so come and visit, have a chat and a coffee and let us show you around. Who knows, it may just be that we can introduce you to what becomes your new church family.

We can’t wait to meet you!